For some, a moose hunt is much more than just a camouflaged excursion into the vast, untamed wilderness with only the desire to cut out the notches on a moose tag. Though most hunters do simply strive for success in the field, a select few pursue something much more prestigious than success alone. These are hunters who put their skills and abilities to the ultimate test in the pursuit of hunting glory.

They are Trophy Hunters — outdoorsman who set out each fall with a certain set of expectations for the animal they hope to harvest; a minimum standard acceptability so to speak. They do it for the love of the hunt, and the joy and excitement that comes in matching wits with that mature, wise old bull that might forever ink their names into the annals of hunting history.

Putting oneself in the situation to harvest a trophy Bull Moose is no easy feat, and for those who really put in the effort and succeed, the reward is an indescribable sense of achievement, and of course bragging rights, known only by those with above average perseverance and dedication, and maybe a little luck. Knowing how to hunt this magnificent animal is only a part of this challenge.

A key in bagging such a moose also lies in knowing what characteristics to look for in determining a quality bull. It’s important here to be selective but not over-selective. This guide will go over the basics in assessing a Bull Moose in the field, and will hopefully give you the ability to determine whether or not a bull meets your predetermined expectations and is truly worthy of being called a trophy!

There are five antler features to consider when judging a bull. Moose antlers are scored based on a certain set characteristics. These characteristics are measured in inches and the final tally of these inches is what determines whether or not a moose will make it into the record books. We will be examining and discussing Shiras Moose just for the sake of explanations. The same measuring and scoring methods here apply to larger species of moose; however, the minimum entry scores will be higher.

The minimum Boone and Crockett score for a Shiras Moose is 140 inches. To be on the safe side, look for a score of at least 150 total inches when judging a bull in the field. This will allow for any slight deductions that may occur in the overall score, or any antler shrinkage that may occur during the mandatory 60 day drying period. Deductions are discussed later. For now, let’s take a look at the 5 antler characteristics to assess when judging a Shiras bull:

Antler width is the first thing to look for in a Bull Moose. It is usually the first real noticeable feature of a bull, and is almost always the first topic of any conversation when discussing a successful hunting trip. For starters, look for a bull that is at least 40 inches wide. This is a good base number because antler spreads bigger than this typically should make the minimum entry score of 140 inches, and with spreads smaller, so are the chances of the bull being trophy. Antler width is not usually the most valuable feature in scored inches, but, as stated earlier, it is most often the first characteristic to be evaluated; which is why it is first on this list.

The second antler characteristic to be aware of is the length of a bull’s paddles. Here is typically where a bull will acquire his highest numbers in the scoring system, provided certain antler configurations are taken into account. It is critical to start out by making sure that the bull has at least 2 brow tines on each side. Some bulls will only have a single, spiked brow tine. Because of the way antlers are scored, this will reduce the overall score dramatically; diminishing any chance that a bull will meet the 140 mark in most instances.

The reason for this is that moose paddles are measure from the front-most point of the palm between two antler tines to the back-most point between two antler tines. To get a better understanding here, refer to the two images below. Note that antler length is actually measured on the underside of the antler palm. In most cases, antler palms are curved or cupped in shape from back to front. By measuring the underneath side of the palm, the absolute greatest antler length is measured.

After determining that a bull has sufficient brow tines, look to see that the palms have good length. A good number for length of the paddles is 30 inches, or 2 ½ feet. Because most antlers tend to be curved or cupped slightly, look for palms that appear to be at least 24 inches long when field judging a bull. It is probably safe to assume that 4 to 6 inches will be added to the estimated length when this cupped shape is accounted for during official measuring.

The next antler feature to evaluate is the width of the palms. This is where a lot of Shiras Bulls are lacking. It is the webbed, broad, paddle-shaped antlers that make moose so unique and different from other members of the deer family, and with a narrow palm configuration, antlers can be significantly underrepresented. Often times a bull will possess a wide antler spread, but will possess very narrow palms.

In such cases, the bull may make up for his lack of palm width with a wider than normal spread, as far as total inches are concerned, but narrow palm width will really make the antlers look less impressive than they are. Now, with that said, you should look for palms that are about 8 inches wide and larger. Bulls with less than 8 inches tend to start looking very thin.

A desirable characteristic that most moose hunters seek is points; lots of points. Each point on a moose’s antlers counts as an addition inch in over all score, so the more the better. Bull Moose that have distinct points starting at the brow tines and continuing on around the outside edge of the palms, all the way to the back of the palms are most sought-after. In a lot of bulls, points protruding off the palms will stop halfway around the palm leaving the back half of the palms with a rounded or wavy edge configuration.

This not only reduces overall score in a trophy but is also not as attractive as antlers with points all the way around from front to back. A good number of points on a Shiras Bull is 10 points. Most mature bulls will have at least 7 or 8 at least.

Lastly is the circumference in the bases of the antlers. This measurement takes into account a bull’s antler mass. This typically is very hard to judge and does vary enough to even really waste your time in trying to determine it in the field. Typically, a Shiras Bull will have anywhere from 5 to 8 inches of mass on each antler. It is probably safe to just assume 7 inches no matter what; as it is not going to make much of a difference.

So what is the overall score of a Shiras Bull with these suggested minimum measurements? Well, here is a breakdown:

Total: Adding the totals from the right and left antler and total spread we get a final score of: 150 inches. This assumes that our moose is perfectly symmetrical and therefore has no deductions.

A deduction is simply the difference, in inches, between left and right antler measurements, as well as abnormal points. It is a way of accounting for the imperfections in antlers that deviate from the ideal (perfectly symmetrical) antler configuration. This ensures that moose possessing undesirable characteristics do not receive higher marks than those with more desirable attributes. When deductions are taken into consideration, field judging a bull becomes slightly more difficult. So, now assume that a moose has the following measurements:

Total: Add the left and right antlers along with the antler spread once again and then deduct the total “Difference” of 4 inches. In doing so, we come up with a score of 146 inches.

In this example, our moose scored lower but still surpassed the 140 inch mark. This is why it is safer to aim for a score of 150 inches. Moose tend to be very symmetrical animals and for the most part, do not have total deductions of more than 10 inches in bulls with more than 1 brow tine on each side. This is not to say that it is impossible, just unlikely if the bull is judged to be reasonably symmetrical in the field.

The challenge that comes with being extremely selective in deciding what animal to harvest. 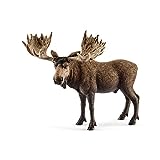 The Best Ways to Store and Organize Your Hunting Clothes

Hunting Dogs – Do You Really Need One?

How To Climb A Tree With Spikes: Detailed...

How to Blow a Goose Call – Everything...

Parts of a Duck Call – Everything You...